Issue-based politics. That's a favourite media catchphrase, often thrown around during election campaigns. But personalities in political circles, do drive the Kenyan media agenda, after all. That's why a serious graft allegation can be packaged as a clash between rival politicians. It's a growing media menace of personalised public interests. 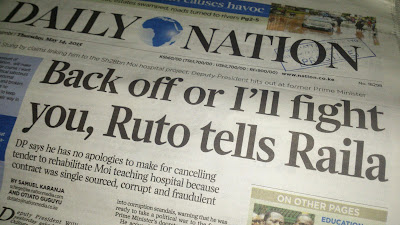 Prominence, no doubt, is a strong determiner of newsworthiness. But should the personalities involved be accorded premium attention, and the weighty matters at hand pushed to the periphery?

A healthy balance would be a more sensible approach, although given a choice, I would prefer the media to consistently dwell more on issues afflicting the nation, than reducing their coverage into personality contests or political duels.

But a press that puts a premium on commercial interests would readily justify having supposedly feuding top politicians in the headlines.

And this sickening developing story continues...possibly drawing sustenance from the sustained media coverage.

Is it any wonder then that the Kenyan corruption dragon has been regularly slaying those seeking to put out the fire in its belly?

The direction the press will take has become predictable and it's no longer hard to discern if the local media is getting too involved in proxy wars, without keeping a professional distance from the players/politicians involved.

The way to public interest is far away from personalising issues!