OF EDITORIAL HOUSE STYLE, A PRISON WARDER AND WARDEN

A media house should develop its own editorial house style. This subsequently informs how its products will be consistently expressed. In its absence, you are likely to end up with a patch work of different styles. So a story about life in prison, comfortably uses warder and warden interchangeably, which to the not so erudite, might appear to be erroneous. 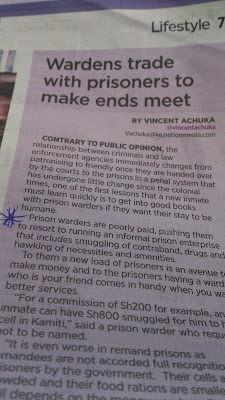 The main article was a brilliant and if credible, a chilling account of how certain levels of comfort are financially inducible in Kenyan prison.

But a side bar story almost 'ruined the impact' of the supposed expose.

My immediate reaction was that there was a linguistic mix-up.

(Yes, I am one of those not so erudite).

A warder is more likely to be found in a prison, while a warden should be spoken of in the context of wildlife or forest rangers, so I thought.

It turns out that:

- A warder is a guard in prison, in British English.

- A warden is the head official in charge of a prison, in American English.

So now you can appreciate my British-American headache.

The cure of this malady is for media outlets to adhere to a defined editorial house style.