Writers of articles in a newspaper can be credited directly by having their names published, usually at the beginning or the end of the piece. Bylines are a much coveted element in print journalism. The publisher after all, can decide to use non-specific labels to indicate the writers of stories. But even these 'non-names' ought to be linked to the media organisation.

And if not, the use of such orphaned or ghost writers can be indicative of, but not limited to: 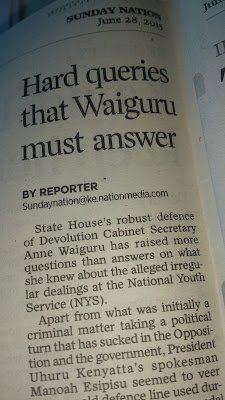 - The publisher not being comfortable with being associated with the content of the article.

- The publisher not ready or willing to take ownership/stand by the substance of the article, (legal suit evasion?).

- The writer not having contributed sufficiently in crafting the article, to deserve either a direct credit, or 'privilege' of being associated with the publisher.

- The subject matter of the article being too hot or potentially explosive, to warrant such distancing between the 'anonymous' writer and publisher

- The article being malicious or not having been published in good faith.

- An honest omission or dishonest commission.

In other words, there would be no need for such 'wide and wild' speculation, if there was the familiar pattern of using either a byline, Reporter or Correspondent of this or that media organisation, or even an external source providing the story

Not unless a general Reporter, with a visible general email address, adds hidden general news value.