FOLLY OF DELAYED ATTRIBUTION AND QUOTES THAT MISS

Attribution gives authenticity and authority to news stories. It plays a big role in determining whether the information is believable. It also crucially helps to separate fact from opinion. Attribution thus needs to be close to the information being published. The folly of a delayed attribution could make the views expressed being equated with the standpoint of a media outlet. 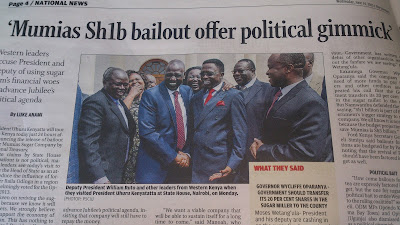 Enclosing the information in quotation marks obviously indicates the details should not be interpreted anyhowly. There could be need to accord a specific context, like merely reporting without shouldering the burden of proof.

Or it could signal there's some doubt with the information, and the details are being published with some editorial reservations.

But enclosing an entire headline of a news story in quotation marks, then expecting the reader to connect it with an attribution buried elsewhere in the body of the article, is living dangerously.

It's dangerous because the headline at times is all that a reader focuses on, and thus a wrong impression could be unwittingly propagated. (It could be subtly deliberate, though). 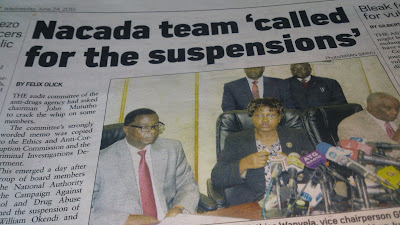 But in some case, the use of quotation marks does very little to salvage any meaning a headline writer hoped to convey, like in the above example.

Just whose suspension did the Nacada team call for?

And by using a definite article, isn't it expecting too much on the reader to be aware of the salient afore details of the story?

Such hanging headlines should not be allowed to survive the sub-editor's noose!

There are also instances, when quotation marks are missing, where they are badly needed, in a news story. 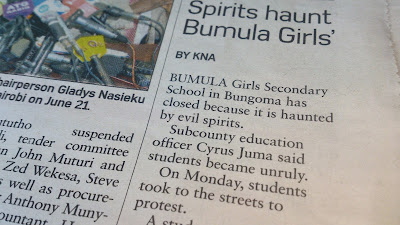 This particular newspaper has smartly decided that 'evil spirits' are empirically capable of haunting a girls' school, without any shadow of a dark doubt.

There's also a big hint of the reporter having had a first-hand experience of the torment unleashed by the diabolical forces, to warrant the direct reportage.

But don't quote me on this!
Posted by Albert Gachiri at 23:00

Did you know you can shorten your urls with AdFly and get cash from every visitor to your short urls.