DEHUMANIZING HEADLINES OF THE LACTATING TYPE

There is absolutely nothing shameful about breastfeeding. Even in this age of formula milk, mothers ought to proudly carry on with raising the next generation, as they deem fit. But some sensitivity is in order, when describing that vital activity by gallant mothers. And if they happen to be still active in sport, the headlines need not be dehumanizing. 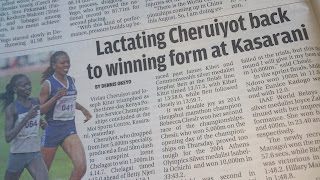 Yes. We are all members of kingdom animalia. Our biological functions are identical on some level. And even though basic instincts can be subdued by humans, maternal instincts still kick in powerfully, once in a while.

But to say a human being is lactating is downright degrading, mostly because it reduces her to the level of... er... well...a cow!

You see, the reason why I find such a description repulsive, is informed and affirmed by my belief that motherhood is sacred, and one of the most selfless acts, especially among humans, (no disrespect fellow animals).

So Mr. Sports Editor, (Mrs. I highly doubt), I would rather not have my appreciation of a nursing mother, used interchangeably with that of a lactating cow. 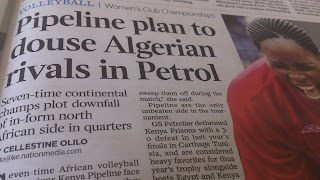 Come to think of it, sports headlines have an uncanny way of being 'creatively' twisted for a presumed extra punch.

And the resultant effect, given the slight chances of the headline being taken out of context, can be alarming. In the above example, the editor can easily be accused of glorifying violence.

And the one below can be a ripe candidate for a heavy dose of cleansing of the spiritual type, delivered by dedicated prayer warriors. 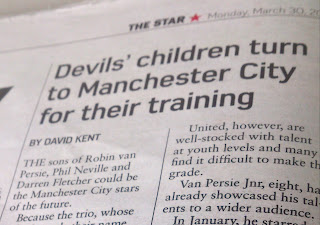 What is fun to sports headline writers is not guaranteed to always be funny to the rest rest of us. Stories of athletics, volleyball and football can easily end up being a daytime nightmare involving the devil's children, xenophobic attacks and COWS!