THE ONE WHERE A NOMINATED MP BECOMES GOVERNMENT

What or who exactly is the government? Has it got three arms? Yes. Does it exercise power on behalf of the people being governed? Maybe. Is it a person? No! So its strange that a Kenyan mainstream newspaper would confidently publish a story suggesting a Nominated MP can be equated to 'the government' or that he speaks as government. 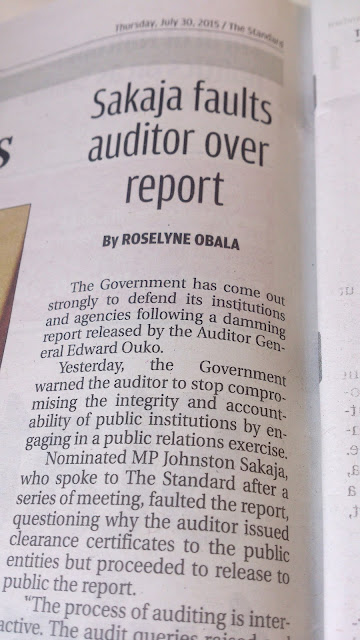 It's widely believed that the said politician can wield influence by virtue of being the Chairman of the party that sponsored the sitting President.

But he wasn't elected by the people to parliament. You guessed it...he is a nominated Member of Parliament.

Is that enough to earn executive powers to represent the government, and its three arms?

Apparently so, if this particular story is to be cited as an authority on matters central governance.

From the article's headline, one gets the impression the story is anchored on the views of one person.

And indeed it is.

Right from the crucially important first paragraph is where things start to go wrong.

The Intro, ably supported by the second paragraph, partly states that:

'The Government has come out to strongly defend its institutions and agencies...'

But it's not clear yet, how this ties to the name indicated in the headline.

It's made to appear as if there was a central entity that had the capacity to speak as government, much in the same light as the president talks of 'my government' in his speeches.

But as more details get revealed, the lofty expectation of an authoritative voice being quoted, comes crashing down to the level of a Nominated Member of Parliament.

He so happened to have spoken to the paper, 'after a series of meeting' if you can understand what that means.

So maybe the nominated legislator was delivering an agreed upon government position. But from the way the article is crafted, it seem like:


Either by design or editorial default, the story content is delivering way more than its lightweight headline.

And just who is the 'Johnston Sakaja' being referred to in the article, and could he be related to Johnson Sakaja?