Interesting times lie ahead for Kenyan media. Major players are experiencing serious challenges. Very regrettably, this has led to job cuts. Media houses should perhaps rethink their business models. And the prospects of a devolved media now look so enticing. Audiences will soon start commanding news coverage at their community level, not begging for visibility in national channels. 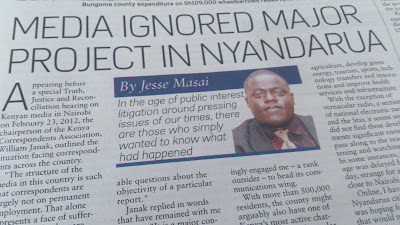 The perception has for a long time been that perceived important events ought to attract coverage by the big media players, a.k.a., Nairobi-based outlets.

So, one of the counties signs two major agreements with a delegation from a foreign country, and yet this hardly made news. And the county's communications department feels aggrieved.

Well, whether there are valid reasons as to why the developments were not covered, or if at all they merited coverage, is debatable.

But in the very near future, that could as well become a non-issue.

You see, the big media players (read Nairobi-based) have been pursuing expansion plans that spectacularly fly into headwinds, predictably perhaps, leaving no option but to wind up many such still-born ventures.

The advent of digital broadcasting, especially, has led to stiff competition, as new players, not necessarily Nairobi-based, begin to crowd the audience market.

And just like it happened in more developed countries, the way to go for the now vulnerable Nairobi-based media players, will not be trying to be everything for everybody.

Instead, it might make more sense for national media houses to have affiliate regional stations, or for them to acquire a stake in small but niche-rich outlets.

On a different note, I couldn't help but 'appreciate' the sense of self-worth of the author of the article above.

Maybe he needs to prove it by persuading his county to consider the idea of having a community media station.