Gears driving the assembly line of fresh media professionals keep turning. Which could in turn mean competition for established journalists. New exciting talent should however, not be seen as a threat, but should be allowed to flourish. Unfortunately, not all progress in newsrooms is celebrated. Those still able to shine, will hopefully be the antidote for the newsroom progress poison. 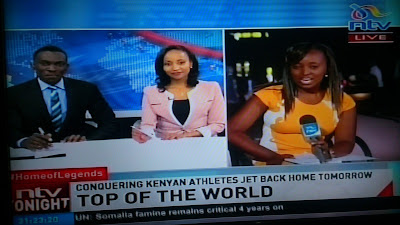 Some new talents are usually snapped up, especially after exemplary internship stints, while others fade away, but not just because of their inadequacies.

Indeed, those showing so much promise can be overlooked, and more opportunities availed to the ones who extend other favours, to those calling the shots, (pun very much intended).

But this is meant to be a very uplifting post about a bright talent, in one of the Kenyan TV news stations, whose progress I've keenly been following.

She pleasantly surprised me by holding a very engaging live interview, with so much confidence and such professional command, to rival any seasoned veteran. 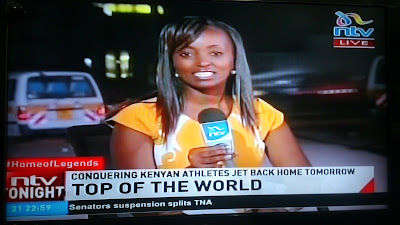 It was a welcomed departure from the 'Ambush-Gotcha-Guillotine' type of TV interviews that many news presenters mistakenly believe is the way to handle their interviewees.

While others first arm themselves with damning evidence, as if on a mission to destroy interviewees, she disarmed her guests by just being calm, graceful and humble, which allowed them to freely share the required information.

It was a joy to watch her steer the interview, and sensibly interrogate her interviewees, covering much ground within the limited time.

Well, that is not entirely true. The choice of location for the interview almost ruined the experience. 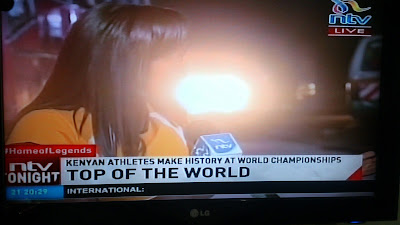 It's terrible being struck with full light beams of oncoming traffic, while driving. But it's equally unsettling and visually bruising, to have bright lights coming straight at you from the telly.

But I'm tempted to think that's how bright the future is, for this fast-rising journalist. And I'm so glad I played a very tiny role in training her.

I have also watched her and indeed that was a great interview. Congratulations andthanks Albert for this great article...

She should definitely be allowed to realize her full potential, by being given all the support and motivation to grow, in this demanding career. She has what it takes to excel.

Thanks. I hope more budding journalists get inspired to blossom.

@Loise_Wangui has great stories from the North Rift

Indeed, her delivery is a rare delight in an industry burdened by the weight of mediocrity.