Artistic creativity is abundantly noticeable on Kenyan roads. Public service vehicles keep raising the aesthetics bar. And the extras on the ride itself could only have been imagined by passengers of yesteryears. Keeping up with technology is key but one can encounter a technological misnomer on wheels. 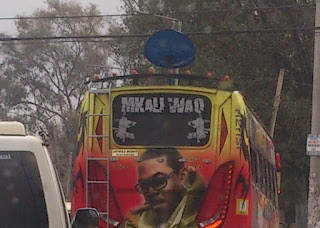 You would not be shocked to find pay TV channels on inbuilt screens, inside the elaborately designed public service vehicles.

At your home, such content is usually accessed via a satellite dish, often mounted on the roof for clearer reception.

When being installed, the technician usually twists and turns the dish until a strong and stable signal is detected, after which the dish is firmly secured.

So, you can appreciate my confusion and amazement, on seeing what looked like a satellite dish on top of a highly mobile public service vehicle.

I would have given anything and a half of something else, to have a peek inside, to figure out how the stability of the TV reception is not compromised by the constant movement of the vehicle.

It does for know, look like a technological misnomer on wheels.

The other plausible explanation is that it's all a gimmick to attract the paying public's attention.

Now that would not be a matatu misnomer!