GODS, MISSING ATTRIBUTION AND THE BURDEN OF AN EDITORIAL FALLACY

Unusual news stories are popular with the audience. They provide an avenue to come close to a strange experience, or phenomenon. The media regularly latches onto this affinity for oddity, and can even regale the audience with tales that prove 'gods are still alive'. 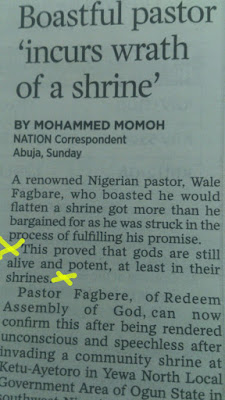 But solid evidence is required, before the extra-ordinary is validated as factual.

The reporting of such a phenomenon, though, is not the same as proving its existence.

Unless...attribution is missing, which then places the burden of the resultant editorial fallacy on the media outlet.

Notice the quotation marks around the words...

It's a safe way for the paper to disassociate itself from any unproven claims.

However, the article further expressly states:

'This proved that gods are still alive and potent...'

Isn't this a direct endorsement, which in other words, equates to the newspaper rendering the information factual.

Kenyan media houses, continue to tolerate such stories because like aforementioned, they seem to excite audiences, no matter how shallow, outrageous or even debased they may be.

I'm worried though, by careless journalistic omissions, which like in the above example, negate the importance of properly attributing frivolous and spurious assertions.

Real reportage is not necessarily about the reality!