OF HEAVEN, HAVEN AND AN EPIDEMIC OF EDITORIAL ERRORS

Communication entails conveying sensible meaning. If the media reduces itself to communicating nonsense, then questions arise about its ability to properly process the information being published or broadcast. There seems to be a growing epidemic of editorial errors in the Kenyan press. And this is not the heavenly picture of a safe haven for professional communicators. 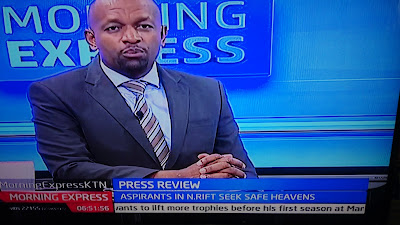 The writer of the above story tag wanted to communicate something to the audience.

This is especially so, because no attempt was made to change anything, despite the glaring 'nonsense' on screen.

If the offensive story tag was properly screened prior to this broadcast starting, or at any point before the particular segment ended, then it would have saved the station from another bashing from enemies of media embarrassment.