Journalism strives to deal with first hand information. That's why reporters are tasked with making direct contact with news sources or those at the centre of the stories they have been assigned to deliver. This is one simple way of assuring the audience that a story is based on solid facts. Credibility gets diminished, if an article is based on unsubstantiated claims. 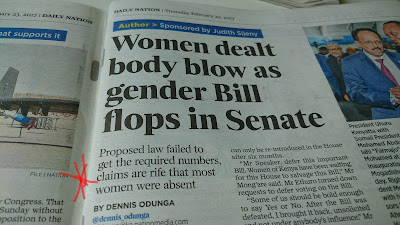 Media houses have been known to spend huge amounts in pursuit of stories they deem important, even if it means crossing international borders.

So, it's quite strange that a story emanating from arguably a walking distance from the head office of a newspaper, unashamedly alludes to the paper not having first hand information about what is being reported.

The headline of the article above, instantly grabs attention like a good heading should, and entices the reader to explore the details of this, 'body blow to women' which resulted in the flop of the gender Bill.

But then follows a strap that destroys this wonderful buildup, by confidently stating:


"...claims are rife that most women were absent."

- How is it that the reporter could not establish exactly how many female legislators were absent?

- Is this particular detail not a part of public records?

- By using 'claim' in the article, is it not tantamount to admitting the information being shared could be inaccurate?

- Can I claim this is lazy journalism?

Nay. I proclaim this to be editorial irresponsibility!
Posted by Albert Gachiri at 20:38

If you have a minute, I’d really appreciate it if you took a look at Emily’s Virtual Rocket. This is a serious newsblog which has been taken from e-newspapers and e-magazines from around the world, with an emphasis on transgender issues. Also, with his election, I look for articles which critique Donald Trump.

I hope you enjoy this. Please paste the following:

If you like it, please consider putting it among your favorite blogs. I would greatly appreciate it.