It has been argued before that news coverage neutrality is likely to be neutered, where media ownership is linked to politicians. Editorial independence and putting public interest first comes a distant second to proprietary interests. And this is coming to the fore as Kenya navigates through an electioneering period. 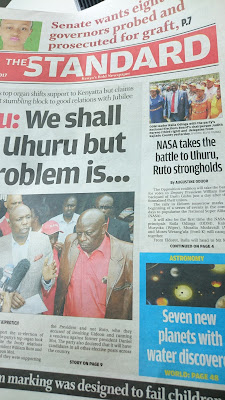 The bias can be oh so subtle. But the media owner's influence can also be elaborately projected.

In this newspaper front page, there is an obvious attempt to offer a balanced coverage of the ruling and opposition coalitions.

What is not so evident, is the calculated placement of the articles.

The splash has a prominent person/party of immense interest (from the paper's perspective), and an accompanying big image to underscore the 'special' treatment.

A pseudo-sidebar story, is then thrown on the periphery of the front page, where chances of eyeballs landing are deliberately diminished

But directly below it comes the clever stuff.

What comes to mind when the averagely educated person comes across the acronym NASA?

Something to do with space exploration right?

In what could either be a mockery of Kenya's main opposition outfit, or a crafty political masterstroke, what is placed in close proximity to the NASA article is a strategic deviation to:

If you think this is a mere coincidence, enjoy your flight of fancy!