There is sense. There is lack of sense. And then there's sheer nonsense, which some Kenyan media outlets have off late taken a keen interest in excelling at. The Editorial deficiency and inability to convey meaningful information to the audience should perhaps be declared a national disaster in newsrooms. 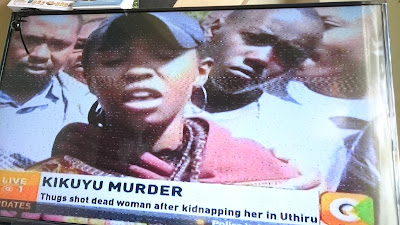 The on air blunders have ceased to be mere visual irritants.

One is at first amused, then bemused, before being left feeling intellectually abused.

In the news story tag above, this is what viewer is being asked to mentally process:


'Thugs shot dead woman after kidnapping her in Uthiru'

Television is full of make believe content but this is stretching it to the realm of lunacy!

Let's break down the appalling caption to try and establish the scale of idiocy being depicted.

- The thugs first kidnapped the 'dead woman' before shooting her.

This TV news channel should also be charged with first degree murder of the English language!