The pace at which news is produced is now remarkably faster, because the work of journalists is greatly supplemented by ordinary citizens, and the digital space also demands frequent updates of posted stories. This means traditional media outlets ought to figure a way of taking significant stories forward, to remain relevant. Newspapers peddling stale news are a fresh disappointment. 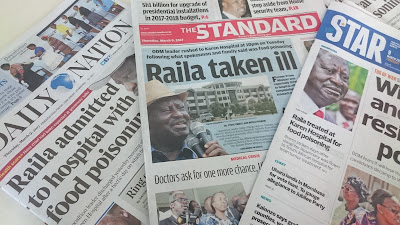 So, a prominent Kenyan politician is taken ill and predictably all the major papers have this story on their front page.

The different editorial teams, it appears, had the same motivation of milking dry this unfortunate development, to whet the readers' appetite and possibly shore up sales.

Back to the content though, and one story conjures up a number of scenarios, according to the assigned headlines.

The opposition politician either is:

- still admitted in hospital due to food poisoning

- still unwell at the time of publication of the story

- out of danger after being treated for food poisoning

The date of publication of this story is Thursday 9th March 2017, the same day that the key subject was reassuring the country about his health!

- The former prime minister fell in on Tuesday 7th March 2017.

-  He was discharged from hospital on Wednesday 8th March 2017.

Is this an admittance of failure to get this story when it was still hot?

And if the information was released late, and privacy issues were at play, should the story still have dominated the headlines, so belatedly?

With almost all major media outlets having an online first policy, when it comes to pushing stories to the audience, it's mighty odd for this story to be prominently retold in retrospect in the dailies.

But you've got to respect the resolve to cash in on a 'freshly squeezed' juicy stale story!