THE WARTHOG, AN ABSENT MIND AND ABSENT-MINDED NEWSROOM GATEKEEPERS

Rewinding facts in a news or feature story could be done for emphasis. There's no much harm in re-stating key elements of a story, to clarify issues, especially. But it's clear some repetitions can be ridiculously pointless. It may be a sign of an absent mind or an absent-minded newsroom gatekeeper. 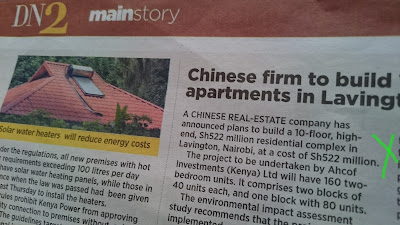 One look at the intro of the above article, and one gets immediately tempted to visualise a warthog, in all its forgetfulness glory.

For it has been said many a times that when a warthog is chased by a predator, it runs for dear life, but shortly after, my dear, it terrifyingly stops and starts scrounging for food, in the middle of the chase, and the predator in full charge.

I'm not saying the writer or sub-editor of that first paragraph is a warthog.

But with all due respect, their behaviour is the same. The story states on the onset that there are:

So we've been told how much it would take to undertake this project.

But the warthog, so...so...sorry...I mean whoever was crafting that lead, found it important after less than ten words, to remind us that the initiative will be:

To make your point, you don't always have to go the whole hog!