The print media has been grappling with how to retain a diminishing readership, with most readers now being averse to paying for content that by and large can be accessed online, on demand and on the go. This has in turn led to more editorial experimentation. I have no beef with creativity, but more needs to be done to achieve befitting relevance, beyond eye-catching headlines. 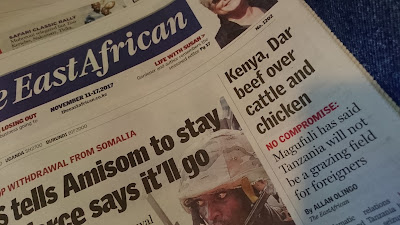 It's quite ingenious to use the 'urban' equivalent of the verb denoting quarrelling, to describe a cross-border disagreement over mainly 'rural' livestock, in the article above.

And it almost appears like the headline writer found it irresistible to string together 'beef' and 'cattle' to drive the point home rather colourfully.

But the article's headline, however, looks a bit odd, because the parties involved in the 'beef' are identified by a country and a city.

You would ordinarily expect either two countries being identified together, or both being represented by cities, for a more evenly weighted delivery of the intended meaning.

That notwithstanding, this use of 'beef' is to a large extent befitting!

Email ThisBlogThis!Share to TwitterShare to FacebookShare to Pinterest
Labels: The EastAfrican