Information is most effective if its shared in a way that directly makes sense to the intended audience. That's why the media ought to communicate in a clear and simple manner. If the words deployed in an article are ambiguous, it could lead to an unintended interpretation. Whipping figuratively could conjure images of weeping, after a literal whipping. 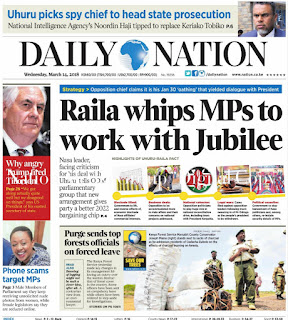 That's why the use of jargon is especially discouraged, where the context is not immediately familiar to everyone.

For those aware of parliamentary procedures, the headline above makes no allusion to legislators being 'flogged' so as to follow a particular political inclination.

There could, however, be a group of 'clueless' readers, who would proudly profess their ignorance on matters politics or the conduct of parliamentary business.

Indeed, someone could have been made to believe that Kenya's former Prime minister assaulted Members of Parliament using a whip, to dissuade them from abandoning a political line.

But the whip needs to be cracked on ambiguous headlines!
Posted by Albert Gachiri at 21:13