NATIONAL PAPER, LOCAL ISSUES: SO WHY A FOREIGN IMAGE?

It's a good idea to think global and act local. In Africa though, what is local stands a very good chance of being despised. And what is perceived to be global, which might actually be just foreign, is readily espoused. That's why a newspaper that primarily targets a Kenyan audience, will use a foreign looking image to illustrate local situations. 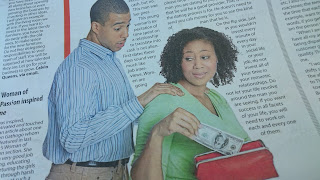 It might be deemed to be inappropriate or even unfair to ask whether a newspaper in the U.S. might find it useful to use images depicting a setup in Kenya, nay Africa, to explain a situation in America.

Here, the Kenyan writer of the article is highlighting the folly of equating a relationship to a source of income.

The couple chosen for the illustration of this situation can pass off as African, with a lot of imagination.

But the worrisome detail from the image in this context, is the currency in view.

Is it that Kenyan money (and couple) was found wanting, or hopelessly insufficient to capture the essence of the story?

And only the 'mighty' U.S. dollar could do the job?

This is a sure way of diminishing local value systems, and adding value to the notion that that which is foreign will always be superior.

Away with this inferiority complex!