Interpretative storytelling is the crown of journalism, and many an editor will frown upon stories that merely state obvious facts, or regurgitate what news subjects said or did. But the media sometimes subtracts meaning and adds nonsense, which leaves the audience none the wiser. 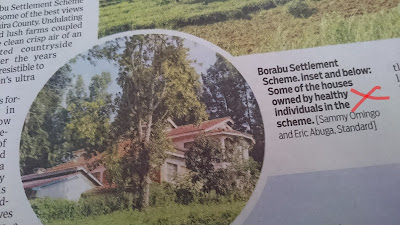 In the above picture caption, it's being suggested that physical well-being is an attribute that's being directly linked with home ownership.

And just how insensitive can that kind of reporting be?

Laundry and dry cleaning is one of the most exhausting chores. It doesn’t only require a person’s physical energy but also consumes a lot of time. It seems that doing laundry is a never-ending duty. Cotton Care made it easy for you to send your laundry and let us handle them with proper care.