TV NEWS, STAR PERSONNEL AND THE WRITING ON THE CAMERA LENS

Broadcasting stations in Kenya have raised their rivalry a notch higher. And this has in turn sparked a scramble for star talent, perceived to be critical in curving a competitive advantage. But there's a growing need to re-engage the audience, because a personnel-centred approach in TV news can only deliver so much. The writing is on the camera lens. 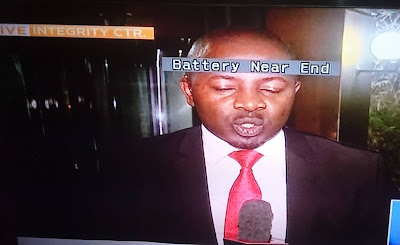 In these 'post-millennial' days, it was surprising that the above live cross with the 'seasoned' reporter/editor, had to be aborted on account of such an elementary technical challenge.

As if the battery status message appearing on screen was not damning enough, the news production crew allowed the live signal to continue, until the camera gave up the ghost, leading to an on air freeze.

It's likewise important then, not to ignore any indication that a channel could be deviating from its core functions.

Enough with 'Tanite' and its associated TV foolery, and let's get focused on the needs of the viewer.

A station may opt to bring together a star-studded team to enhance the delivery of content.

If the content is wanting, however, no amount of 'fine' delivery would compensate any lack of serious substance to offer the audience.

May 'tanite' find its way back to 'tonight'!

I appreciate how you put an effort for these writings about Dry cleaner and I would recognize that you really did a good job!