If the work of journalists was to simply report what newsmakers say, then it would be very difficult for the audience to distinguish between fact and opinion. The media's role should revolve around adding value to expressed views, not simply relaying utterances or public pronouncements.

It is quite disappointing that comments made by Kenya's deputy president, with potentially serious implications on the earnings of a certain cadre of workers, were not subjected to an equally serious interrogation, before being published.

The main argument being advanced is that the monthly contributions to a national health fund should be much higher than they currently are, for those earning higher salaries.

On the face of it, it sounds like a sensible suggestion....but the reasoning behind it...is worthy of at least a counter-argument. 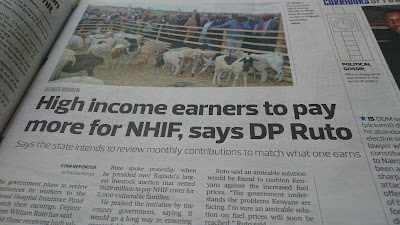 I can't help but wonder why it doesn't seem to count that the higher income-earners already shoulder a weightier tax burden.

And probably due to shortcomings in the public health system, this same group has people paying for expensive private medical insurance covers, to access better quality healthcare.

Shouldn't the government be challenged to first improve public health facilities and ensure taxes are properly utilised, before calling for higher contributions to the national health fund?

Would there even be the need for private medical cover, if public medical facilities offered superior services? 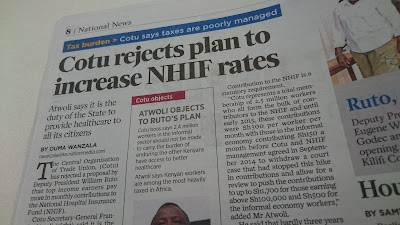 These are some of the issues the media should have picked on, and including the voices of experts, to enable the audience to have a clearer perspective and wider context of this call to increase health fund contributions.

But I guess that would deny the Kenyan media it's 'favourite' pastime of reporting 'he said-she said-they-said' which actually doesn't say much to the audience.