The cost of living in Kenya, it is now widely feared, might be about to get dangerously close to being unbearable. And the local media has been firmly locked on highlighting this issue, as the country awaits a decision by the president on a critical piece of legislation. But this pressing matter it appears, is now even confounding the press. The result is 100% value added inaccuracy. 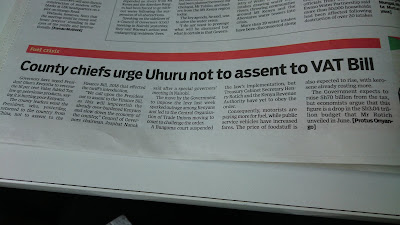 After consistently reporting on the merits and demerits of the president assenting to the Finance Bill 2018, it's a bit surprising to see an article in the mainstream media that is seemingly out of touch with the basics of this major story.

This in turn could easily leave the reader as 'confused' as the said newspaper.

To begin with, does anyone have a clue as to what exactly the 'VAT Bill' captured in the above headline is referring to?

There has been widespread coverage of the calls to shield citizens from high fuel prices, courtesy of a 16% Value Added Tax on petroleum products that came into effect at the beginning of September.

Pressure has thus been mounting on the president to assent to the Finance Bill, which has a clause suspending the implementation of the VAT on fuel. 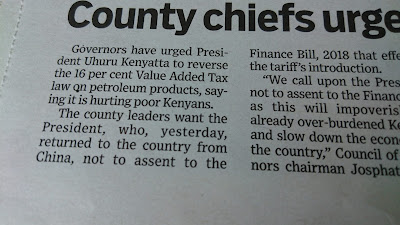 Then suddenly, this article audaciously turns the facts around!

My head is still spinning from this spin-off.