OF KENYAN MEDIA AND 'CARTOGRAPHIC GITHERI'

Some content that gets published in Kenyan media outlets can be quite astonishing. And this is not always linked to the substance of news stories. Unchecked creative language use, or misuse of English can give rise to strange expressions like 'cartographic Githeri'. 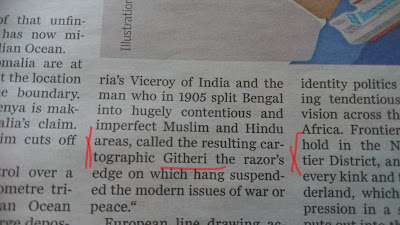 Anyone familiar with the dishes of central Kenya, will be quite perplexed by the highlighted section in the article above.

It may not be lost to many others that the term 'Githeri media' has often been used to ridicule the 4th Estate in Kenya, for its perceived penchant of focusing on 'trivial' matters, or to disparage media content that is deemed to be of poor quality.

This, of course,  has to do with a certain 'overhyped gentleman' who got copious media attention, after being spotted with a bag of that dish mostly associated with central Kenya, while waiting for his turn to vote. 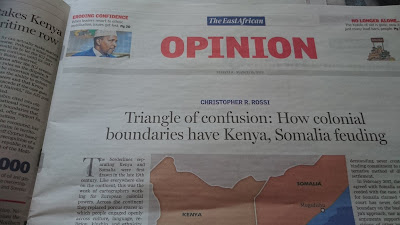 Even though the article has to do with Kenya, the context in the identified section is far removed from Kenya, taking us as far as the Indian sub-continent.

And the writer of this opinion piece appears not to be a native of central Kenya.

So what exactly is this 'cartographic Githeri' or is it another reflection of a catastrophic 'Githeri media'?
Posted by Albert Gachiri at 20:25