The media can report on every subject, as long as it's in the public's interest. And its journalists or news editors, are given the significant task of determining the newsworthiness of a story, interpreting facts, and repackaging them for the audience. But it's hardly safe to conclude that media practitioners have adequate or uniform capacity to discharge this noble duty. Media lunacy especially, can thrive in a statistical fallacy. 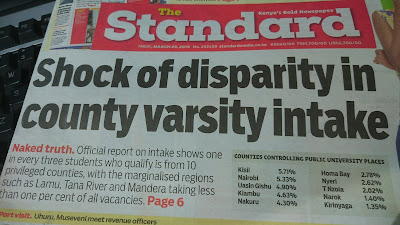 Statistics or stories with a lot of mathematical details can be quite a challenge to many scribes, and once in a while, you can come across 'shocking' interpretation of raw data.

The lead story in the Kenyan daily above, could be an example of how strange stories can 'purportedly' emanate from concrete research.

Admission to local universities, one would like to believe, is strongly based on merit, the limitations by factors such as good facilities or superior teaching staff notwithstanding. 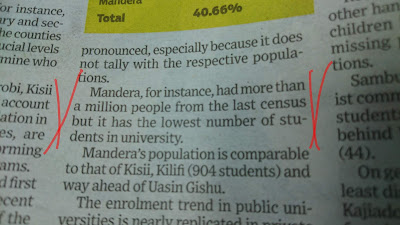 It is therefore a bit perplexing to see university enrolment being directly correlated with variables like population size, in a not so 'meaningful' context.

How can a region having the lowest number of university students recently, be linked with population statistics from 10 years ago? 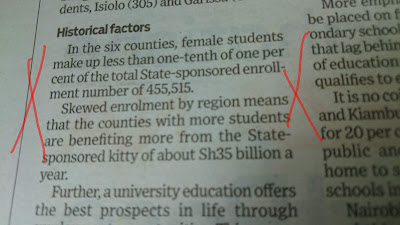 The processing of information from the same set of data, appears to lead the writer/editor into making very confusing interpretations, like:


'In the six counties, female students make up less than one-tenth of one per cent of the total state-sponsored number of 455, 515.'

What would such convoluted facts really mean to the average reader?

The 'shock' element so desired by the publishers of this article, leaves a lot to be desired!

Email ThisBlogThis!Share to TwitterShare to FacebookShare to Pinterest
Labels: The Standard, Varsity Intake