EDITORIAL WRITING: HOW NOT TO

A newspaper's editorial space stands out from the rest of the publication. It is where the paper expresses its position on topical issues. And for very good reason, therefore, not just any staff member can craft this highly regarded article. That's why it's so shocking for a newspaper to allow a poorly written article to occupy its editorial page. 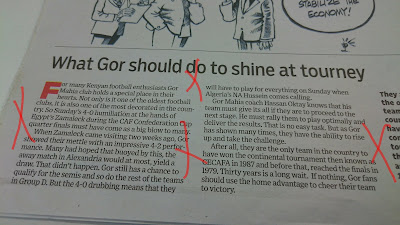 And poorly written, in this case, is not in terms of how the article has been laid out, or even grammatical inadequacies.

It is an alarming congruence of inaccuracies and fallacies.

A stupefying display of ignorance and detachment from historical facts.

And a shameful portrayal of journalistic flaws.

The articles seeks to rally one of Kenya's most successful football club, to achieve even more success in an Africa cup competition, after registering successive losses. 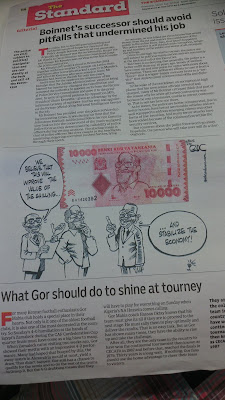 These are the main highlights of the article about Gor Mahia:

- 4.0 humiliation at the hands of Egypt's Zamaleck

- Thirty years is a long wait

How is it possible for the editor not to know that the Egyptian team is Zamalek, the tournament is still in the group stage not quarter finals, Gor has already played the Algerian team at home, and the next opponent is Angolan side Petro Atletico de Luanda?

The most horrifying misinformation is that Gor is the only team in Kenya to have won a continental tournament, then known as CECAFA in 1987.

How does one even begin to confuse a continental tournament with a regional one?

And that is how not to go about editorial writing, my not so learned editor!