THE CASE FOR HAVING AN EDITORIAL DIRECTOR OF DIRECTIONS

The press should aspire to be regarded as a credible chronicler of major events and significant occurrences. But if simple information proves hard to handle, the perception created could be that complex details are likely to be mishandled. So, here's the case for having an editorial director of directions. 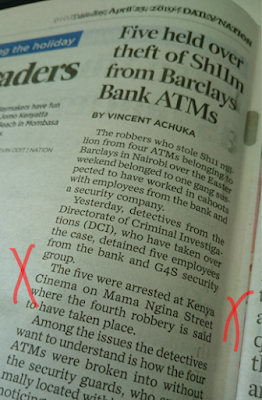 In a rather discomforting quick succession, the local dailies have done a terrible job of helping readers get a clear picture of the physical location of a specific place in a news story.

Again, it's greatly distressing for someone familiar with a particular place to see it's location being described in ways that are grossly inaccurate.

The area around the building that housed what used to be called Kenya Cinema, is or should be well-known to those who work or grew up in the Kenyan capital.

It's pretty much in the CBD of Nairobi, and for a long time, used to be a favourite meeting point, especially for those active in the dating scene.

The way this article yet again gets the street reference totally wrong, makes for a strong case for local newspapers to have an editorial director of directions!