To share knowledge, one has to be in the know. Many media outlets try to appear-all-knowing. Then it all falls apart, when the apparent knowledge gaps gets blatantly exposed. And to think that all it could take to make a big difference, is a little reggae-inspired research. 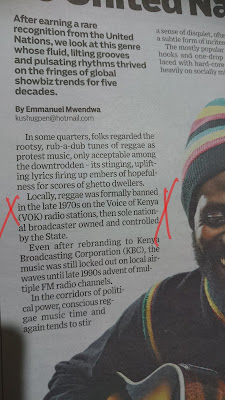 The writer of this article does well in capturing many facets in the evolution of reggae music.

However, there are a few details that would raise credibility concerns, especially among those familiar with this subject matter, like yours truly.

The ban of reggae music in Kenya was much evident after the 1982 coup attempt, and this is linked to the fact that this is the type of music that was being played on air, before the national broadcaster was secured.

It was also widely being mentioned at the time, that this genre of music glorified and promoted the use of proscribed drugs, (of the Jamaican flavour).

Unlike what is reported in the article, reggae made a comeback in the public broadcaster in the later part of the 1980s.

I still remember how refreshing it was to hear from the radio, Burning Spear chanting down Babylon in Mek We Yadd.

And, the Grammy Award for Reggae started a bit earlier than what the article purports. 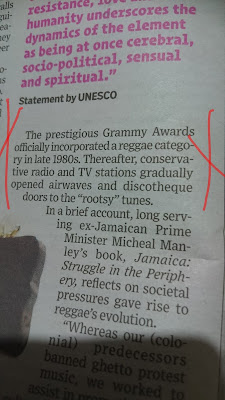 Again, I should know, because the first recipient was, and still remains my favourite reggae band, Black Uhuru, in 1985, for their phenomenal album, Anthem.

Granted, the press covers a lot of ground to keep its audience informed.

It could be about current affairs, future events or even past occurrences.

Present events could be hard to process correctly and, well, the future can be unpredictable.

But historical facts should not be that hard to relay, if you know where to dig them up from.

That's the beauty of research in journalism. Details from eons ago can easily be woven into modern-day articles, for depth add contextualisation.

For the umpteenth time, the media should not underestimate the capacity of the audience to discern between facts and fictitious accounts.