There ought to be a semblance of factual unity in the information a media outlet is pushing out. And if accounts of the 'truth' are in conflict, then a balance in coverage is essential. However, the media consumer should not be left with different versions of the same truth. Somewhere therein lays some lies. 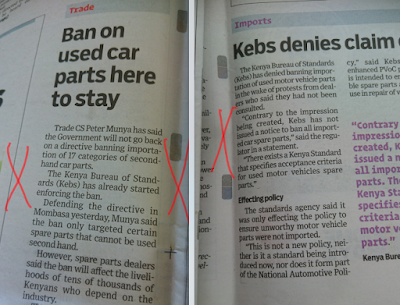 In the above newspaper publication, the reader is confronted with contradicting interpretations of what is seemingly one policy from the Kenyan government.

One article in the newspaper states that the government will not relent on implementing a supposed ban on the importation of some used care spare parts. 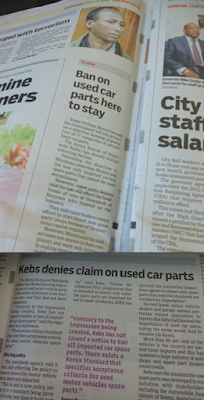 Here, the relevant government agency is said to have started enforcing the ban.

A number of pages, later on in the same newspaper, the very same standards agency is quoted denying its enforcing a new directive seeking to ban importation of car spare parts.

Whether the two articles are differing on whether it's a new or old statute, is besides the point.

And neither is it of much significant consequence here, if the said ban targets all or some car spare parts imports.

The concern here is the failure by the newspaper publishers to provide a common context for these two related articles.

In a reader's mind, this media outlet could be laying different versions of the same truth.

Who do you think is lying?