Media coverage can revolve around current issues, past events or even future occurrences. The reader, viewer or listener would not find it hard to follow a story framed on whichever time frame, especially if the context is logical. This is achievable as long as editors don't get tense, to the point of mixing-up tenses. 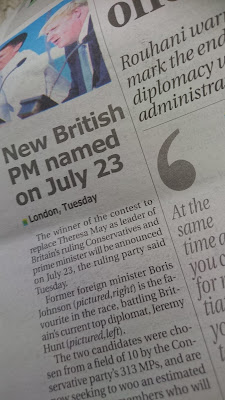 A news story can begin with the anticipation of a future happening, dash to past events, before settling on present issues.

This would still make sense, if the reporting tenses don't imply an element of time travel is required.

This newspaper article was published on 26th June.

The story states the winner of the contest to replace Theresa May as UK prime minister will be announced on July 23rd.

But the headline states:

A reader has every reason to get tense, with this lack of attention to tense matters.

Or is this a prime example of a future, past impossible tense?

Cue in the tension headache!

dry cleaning servicesis a manner of cleaning clothes besides the use of water. The absence of water in the manner is the place the identify dry cleansing comes from.

dry cleaner a shop where clothes are cleaned with chemicals