A journalist or any writer must know that the interpretation of what's already published is likely to be beyond their control. As such, care should be taken to ensure any semblance of vagueness is dealt with, to narrow down the chances of misinterpretation. A headline can be loaded with many call to action words, but end up causing an unintended reaction. 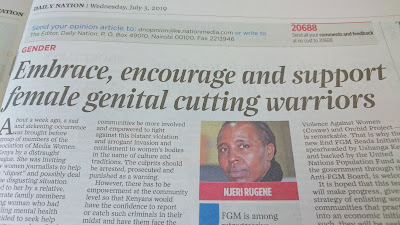 The headline of the newspaper article above, can lead to a very 'dangerous' interpretation, which the writer and many a reader would be quick to frown upon.

What are people being urged to do?

Say that again slowly....but now with emphasis on the part that says:

What are we talking about here?

A warrior is a skilled fighter...so here...it can be somebody who is experienced in...female genital cutting?

Notice that it's not clear if the warrior is fighting against female genital cutting.

But, a warrior, in contemporary usage, can also be a reference to somebody engaged in a defined struggle or cause.

However, note again that the headline does not directly imply this warrior is against female genital cutting.

The constraints of space notwithstanding, the headline would have better communicated the message if it read:

A good sub-editor should strive to panel beat the copy to make it as close to the intended meaning as possible.

Simply put, avoid being vague like the plague. And it's better to be obvious than ambiguous!
Posted by Albert Gachiri at 18:27