SPORTS JOURNALISTS, FOOTBALL AND BECOMING ONE WITH ALCOHOL

What do you get from a sports journalist covering a football tournament in a foreign country? Articles about football, yes? And if the writer is enterprising, you expect coverage beyond football matters, no? The writer can focus on drinking habits, and the cost of beer in the host country. However, not only is it good not to mix drinks, it's bad for alcohol and football to become one. 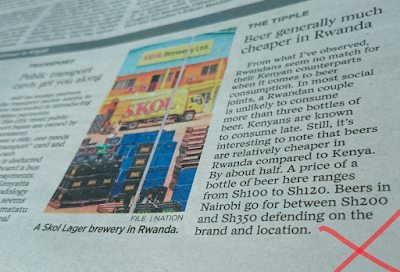 Old habits die hard, and this perhaps explains the intrusion of the football field terminology, in an off-pitch scenario, in the side bar article, above.

The writer, one can hazard a guess, was sampling the social scene of the host country, and came dangerously close to the point where football and alcohol became one.

There's hardly any other colourful way to justify this statement:


'Beers in Nairobi go for between Sh200 and Sh350 defending on the brand and location.'

Well, it depends on whether one is being attacked by alcohol, or a competing team's attackers!
Posted by Albert Gachiri at 11:34