TV SIN NOT TO BE SEEN IN A WORST CASE SCENARIO

Technology is amazing. And Kenyan media outlets have been trying hard to latch on to new innovations in the industry, although it's usually often a case of playing catch-up. Some levels of operational sophistication are, however, ignored, either out of ignorance or reluctance to embrace change. And that's why you may end up seeing a TV sin not to be seen in a worst case scenario. 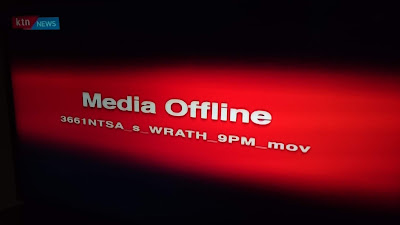 The signal above is what was broadcast, most probably due to some technical hitches.

But should this ever be the case, given the options available to avoid such displays of malfunctioning systems being beamed to the viewer?

Is there such an overwhelming need to have the transmission always on 'Live Mode' and would a delay of less than 10 seconds be that catastrophic?

Alternatively, the system can be rigged to play out a particular content as backup, for example, an in-house promo, whenever there is an interference of normal transmission.

In other words, the default setting would be to air a pre-selected clip, instead of letting the whole world know that there is a problem in the control room.

But in this part of the world, it would not be strange to be told that this was a failure of the backup system.

And so a TV sin like this, is likely to continue to be seen, even in the worst case scenario!