OF DIFFERENT POINTS NOT BEING YIELDED FROM SAME FACTS

Towards the end of the year, news stories have a habit of making a disappearing act. This means newsrooms often struggle to get content to fill up their regular broadcasts or publications. What can work is preparing for this lean period in advance, and setting aside backup stories. What won't certainly work is repeating the same facts in the hope of making different points. 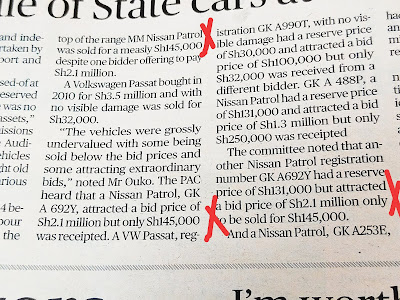 In the newspaper article above, there no additional value in repeating the bit of information, especially in such close proximity.

It could be that the editor wanted to emphasise the shocking details of the scandal being reported.

But re-stating the same facts more than twice, amounts to a needless over-emphasis.

And, using the same wording, would likely make a reader wonder why the paper wants this particular bit of information stressed, or whether there's a hidden motive.

Either that, or it's a case of an absent-minded editor, not minding about editorial responsibilities.