OLD MEDIA ISSUES AND DICTATES OF A NEW DECADE

It's the beginning of a new decade. But old issues appear destined to remain on the Kenyan media landscape. It's been more than ten years and counting, since this platform started to highlight editorial missteps, misadventures, misinterpretations, misinformation, and the occasional media brilliance. 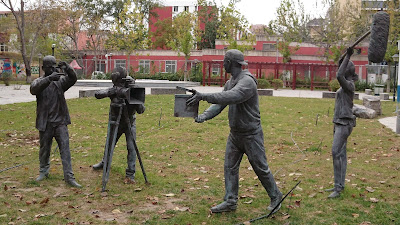 However, of what value will continued critiquing of the same mistakes be?

Going forward, it should no longer be about pointing out media failures at the level of simple typographical errors, and reporting or contextual inaccuracies.

It may be a long shot, but one hopes media coverage of local and international issues will evolve into a more sophisticated venture, feeding on the latest newsroom innovations, and driven by the most modern technologies.

This, I strongly believe, will subsequently trigger a more rigorous, and elevated media criticism.

indeed, the weekly frequency of the posts here, has remarkably been consistent.

But it may now be prudent to reduce the output, so as to allow the focus to be on weightier issues, whose merit should be pegged on significant value addition, and not mere media criticism.

POSTSCRIPT:
In the beginning of the last decade, there were very few Kenyan platforms, solely dedicated to media criticism. It was easy to push out very exclusive content. And in those days, posting screenshots of editorial blunders was still a novelty in this part of the world. But at the onset of the 2020 decade, virtually anyone with a smartphone, Internet connectivity and either of the abundant social media accounts, can be an effective media critic. An error in the traditional, digital or even alternative media, can't go undetected for long. This platform therefore, feels a little less obligated to keep the media in check, and grateful to have played a role in inspiring the culture of media scrutiny in Kenya.
Posted by Albert Gachiri at 21:47