The world of make belief works best in the movies business. Truth might sometimes be stranger than fiction, but facts remain the bedrock of true journalism. There is fantasy football, but there can never be fantasy news. That's why foolishly unbelievable newspaper accounts are so irksome. 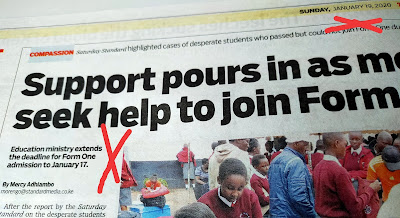 It's almost impossible to explain why the editor elected to dwell in impossibilities, in crafting the article above.

Immediately after the headline, a reader encounters a strange bit of information stating:


Education ministry extends the deadline for Form One admission  to January 17.

Have you noted the absurdity yet?

I've given you a clue already. And it has all to do with the date of publication for this particular paper.

At the far-right corner...the date reads 19th January! And the deadline extension being suggested...up to 17th January. 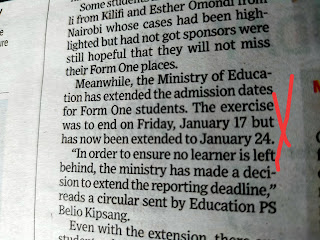 The 'clueless' editor couldn't care less that the right information is well captured in the main article.

The reader would certainly care more if editorial judgement is not easily compromised.