WHERE FAKE WRESTLING IS AS GOOD AS IT GETS 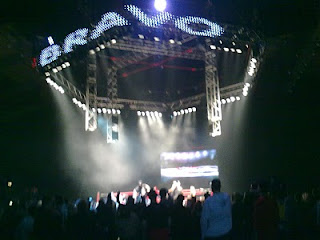 It is a known fact that wrestling, as sport entertainment, does not involve actual fighting. And yet millions of fans across the world have remained ardent TV fans. But when people pay so much to see the actual recording of the fake fights, that's when a fan becomes a fanatic.
As soon as the doors of London's Wembley Arena opened, there was a mad rush as families accompanied by their children, grown men and women, sought to quickly identify their seats.
Some adorned meticulous costumes, while others removed their coats and jackets to reveal T-shirts inscribed with the names and pictures of their favourite professional wrestlers from the hugely popular WWE franchise.
And to show their appreciation of the sport, many had taken their time to create colourful placards, banners and flags, or maybe it was because the event was being recorded to be televised at a later day and they wanted to catch the eye of the cameraperson.
But the strongest impulse it seems, was to take pictures with the glittering TNA screen behind, and to take away a piece of the night's action, frozen in time, as a permanent record of their attendance.
The great pro-wrestling fake moves
When the professional wrestlers took to the ring, I finally got to see with my own eyes, what many people in Kenya found hard to believe. It is all acting and no fighting.
Just like in the movies, every move is carefully choreographed and you have to admire the steps taken to ensure the camera angles are positioned in such as a way that the illusion of real fighting could be easily transported to the television screen.
So with the camera behind him, the 'legendary', Kurt Angle pummels his opponent, but from my view, I can clearly see that no blow is making any actual connection.
On that account, maybe the 'fighters,' deserve to be referred to as professional wrestlers. It takes quite an amount of skills to get the timing right so that you don't hurt your colleague during all those body slums, or pro-wrestling manoeuvres like knee drop, suplex, clothesline, spear and submission holds that really look excruciating on TV.
The camera does not always lie though and people do actually get thrown up quite high in the air, which means the amount of padding on the ring ought to fit the bill.
But in the fantasy world of the fans, some who paid as much as £50 pounds, (Ksh 6,000), for ringside seats, the fact that there is no real fighting going on is inconsequential. They loudly cheer and express real emotions, when for example, their star makes a comeback from imminent defeat to win a match.
There is no denying different folks from enjoying their different strokes.
Posted by Albert Gachiri at 14:21

Do you know that one of my first enterpreneurial adventures was selling the wwf (american version, i think?) stickers to primary school kids? I was crazy, I bought them in bulks of 100 stickers for ksh 500, and sold them at 10 bob per sticker for non porpular ones and 20 bob for Big Bossman, Undertaker etc.

The venture came to an abrupt end when my kid sister, who was my salesman at her school ( I think she was 10 years old at the time), was "arrested" by the school admin and threatened with suspension. Sh etold on me at home and I got into serious trouble with my parents.

Anyway, I never was a true fan but I alsway thought that for that amount of fighting there should be more bleeding than what I saw. I know many people whou will be very dissaointed to learn that it is all acting.

The fight simulations are planned way in advance and moves rehearsed ahead of the event. If the script says so has so has to win, then that's the way it will play out. But I still find it hard to believe that despite all this acting being so evident, the fans pay so much to attend the events and still cheer wildly. So Rapudo, it really does not matter if people realize the fights are fake. The excitement might still get to them.