THE 'I WILL SUE YOU' LEGAL DILEMMA FOR JOURNALISM

What legal landmines come with hosting a 'sharp' lawyer in a TV talk show? I hardly thought this was any different from hosting any other person. That is, until Kenya's Education minister told one of the panellists, in a recent show, ' If you continue that way I will sue you!' 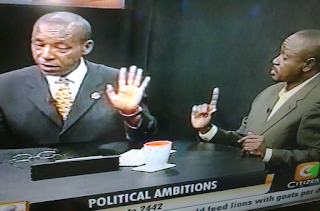 This obviously came as a bit of a shocker to the visibly shaken panellist, keen to pursue his line of questioning, after appearing to be on to something big.

But that sharp rebuke resulted in fading hopes of pinning the minister, on his alleged link to the transfer of Sani Abacha's loot from Nigeria.

So, this does raise an interesting scenario for journalism as a whole. Aside from the known journalism privileges, are journalists or programme panellists culpable, based on the kind of questions they ask?

In other words, was it in order for the Education minister, who also boasts of being the first person in the region to have attained a First Class degree in Law, to have threatened the panellist to desists from a particular line of questioning, or risk litigation?

I have heard cornered TV talk show guests, warn the interviewee not to raise the matter outside the studio discussion or they would face legal consequences.

But a direct 'I will sue you' is raising a scary proposition. The path to unearthing truths in the interest of the public, might just be too risky, legally speaking.