Kenya's leading daily newspaper has demanded that the Rwandan judiciary must accord the country's jailed opposition leader an expeditious appeal. In a very unusual departure from tradition, where such strong reactions are clearly labelled as editorial commentary, the paper stated that Victoire's Ingabire's trial fell short of international standards. 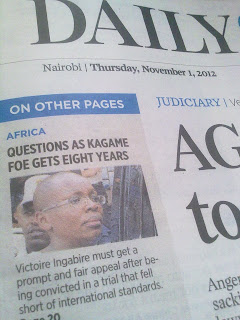 This is a classic scenario depicting the folly of failing to attribute. It's especially invaluable to journalism students. In this front-page story highlight, who is saying, "Victoire must get prompt and fair appeal..?" Take a closer look, if you please. 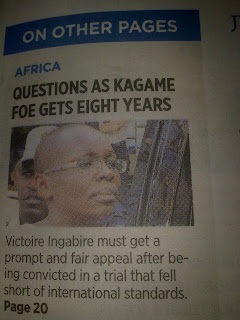 In the absence of any attribution, a reader can rightly conclude that it is the Nation Media Group, the publishers of the Daily Nation, which is articulating its position as an institution.

This, it goes without saying could be catastrophic for the largest media organisation in East and Central Africa. By taking such a stance, there could be very grave legal, political, commercial as well as diplomatic consequences.

And if this danger could have eluded the many levels of gate-keeping in such a reputable media outlet, it is indeed worrying, in my opinion.

This is more so because on turning to the page carrying the actual story, you clearly get to see that it is Amnesty International that is making the demands, in the aftermath of the jailing of Rwanda's opposition leader. 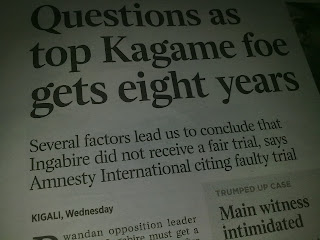