THE STRAY TWEET ON THE TREND: CAN SOCIAL MEDIA OVERRULE TRADITIONAL MEDIA?

A Kenyan TV station has been running an innovative talk show, which directly taps into new media. To fit in with social media parlance, it's called 'The Trend.' And it inadvertently could have set off a new trend: allowing a journalist from a competing channel to fire a question at one of its guests. 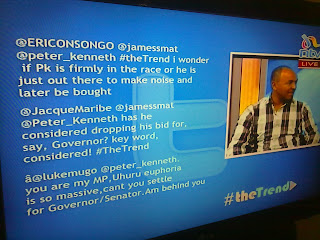 The 'stray tweet' from the external journalist certainly turned up the heat in that discussion, succeeding in putting the guest on the defence, and perhaps helping the programme host to raise an issue that probably would not have been covered.

It indeed drew a sharp rejoinder from the guest, who did manage to identify the 'stray' question was from a journalist, (from another station?).

But what made the programme producers to pick out this 'stray tweet' knowing very well it was unusual to give a platform to a journalist from a rival station to make any contribution in their show?

That particular move, is by all means daring. And it serves to indicate how social media can easily tear down the walls put up by rival or competing traditional media outlets.

Should this trend be encouraged?

I think so. The conversation never ends!

It should not be encouraged. There are social media guidelines for journalists and one of the key ones is to promote your own organization - and by contributing to a conversation elsewhere, you are inadvertently undermining your own team

You could be right, especially if you are looking at it from the point of view of a traditional media setup. Granted, loyalty to the organisation dictates that a journalist refrains from enhancing the position of a rival media house. But to attempt to slavishly chain social media liberties to the confines of traditional media perceptions is, I dare say, futile in the long run. I'm postulating that some rigid positions restricting the expression of journalists in social media circles, should be dismantled, in the interest of the audience.