THE POLICE IMPOSTER AND THE OPINION COUNT IMPLOSION

That it's a most daring undertaking is not in doubt. For how can someone pose as a high ranking police officer undetected for so long? But when it comes to whether the suspect should face trial for his 'alleged' misdeeds, that is debatable, according to one Kenyan TV station. 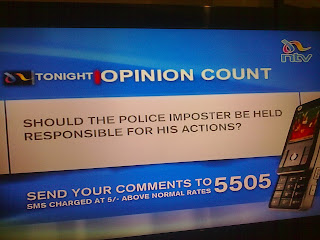 How does one even begin to interrogate this 'humongous' journalism faux pas?

Seemingly, the person who crafted this feedback question that is supposed to 'harvest' reactions from the channel's audience, is aware that somebody was impersonating a police officer.

However, it appears he or she is not sure whether anybody found perpetrating such a crime should be answerable or better still, be 'held responsible for his actions.'

And this question, if I can needlessly remind you, is posed after the news item has been broadcast, detailing how this person went to the extent of sacking his supposed junior police officers and even attending a top security meeting.

The onus thus, is thrust to the viewers, to debate and possibly arrive at a 'reasonable' conclusion, courtesy of the not so scientific poll results, to be given at 'the tail end' of the bulletin.

There was a debate alright. But some members of the audience were not so enthralled by the framing of the feedback question.

Many Kenyans look up to the local media to offer guidance and help them make informed choices. If an alleged serious crime is clothed in so many shades of grey, what is being said about the rule of law and the country's criminal justice system?

Heheheheh... I don't agree more.Most of the opinion poll questions across board are comedies of the absurd if not hillarious.They are more baffling than Kenya Kona comedy.'Do you support the sacking of the junior policer by the Police Imposter'or'Do you think it was proper for the Police Imposter to attend top security meetings'- Peri