It's all well for a media house to bask in the glory of an exclusive story. And my, one Kenyan news channel has just 'achieved' this fleeting 'high' of journalism. But, given the sensitivity of the subject matter, the exclusive interview could easily pass for a media inquest cross-examination, or even a police interrogation. 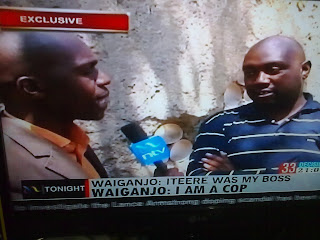 The questions were in rapid-fire mode. And the short responses only served to hasten the pace of the interview, because the reporter was gallantly unrelenting.

Inevitably perhaps, the line of questioning started approaching the legally unsafe waters. Unsafe, in my not so legal mind, because the interviewee has pending court cases, and an official inquiry, whose main substance is what the reporter was prodding him to state his position on. 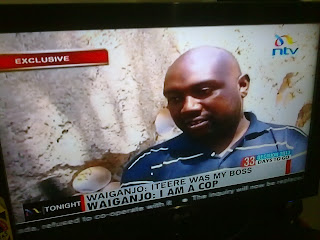 With due consideration of the role of the media in seeking to unearth the truth, its fidelity to public interest, and that the reporter did intimate that what went on air is what was legally safe, I still feel this interview prejudiced efforts to unravel the mystery behind this alleged police impersonator.

One can also argue that this particular case was now being politicised, especially given that the interviewee told a national television audience that he was willing to make damning revelations.

This, before making known his desire to only pass the information to high-ranking government officials, like Kenya's Prime minister. And, there's no prize for guessing how this story developed, less that 24 hours later. 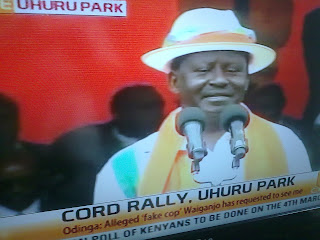 The 'fake' cop's request was one of the talking points of the Prime minister's address, at a political rally. One can even argue that it has now become an election campaign issue, going by the way the Prime minister used it as an entry point, for his pledge to bring changes to the 'tainted' police force.

Obviously, my observations come with no guaranteed veracity. 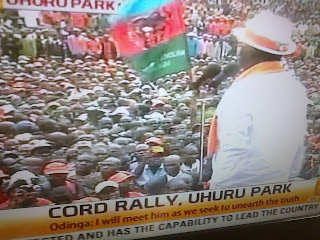 But suffice it to say that two people are now very happy. The alleged police imposter, because his plea has been heard by the Prime minister. Whether he gets to have his wish fulfilled as promised, is besides the point, because his point has been made.

And yes. The reporter will be pleased with himself, for setting the agenda for none-other than the country's Prime minister, now confirmed as one of the presidential candidates, in Kenya's approaching General Election.

Or could we remotely contemplate, albeit wildly, the possibility of this entire turn of events, having been orchestrated? Only if it's a movie script!!!

I couldn't agree more. How bout you do a review of the said journalist's interview with Othaya parliamentary aspirant Mary Wambui. I found it a bit wanting. It was more of an interrogation that an interview, a direct mirror situation of the above "interview". What happened to not asking an interviewee closed questions? How about building rapport? It could also be this is a new style of interviewing, maybe the journalist can tell us.