A headline sells a newspaper story. And the front-page one can be directly linked to how many copies a paper sells. So, some headlines are made to promise so much, yet deliver so little in terms of content, as long as they generate sales. Granted, this is unethical. But to have a headline entirely disconnect with its supposed story, is almost unpardonable.

The above headline is catchy and has a very active verb that denotes a heightened emotional component and a strong hint of some simmering conflict.

It practically summarises what the story below it should be about. So one would expect to get more details about:

Which 'herdsmen' they are not pleased with

And the reason why the 'Konza society members' are 'angered'

Let's see how many of these details have been delivered. 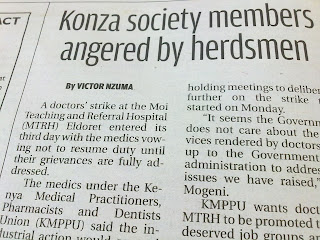 Not even one! This is legendary. Alas!! The story is about a doctor's strike!!!

How such substandard sub-editing can go through all the gate-keepers in a national newspaper, and the paper then allowed to hit the stands, is a most undesirable journalism 'stunt.'
Posted by Albert Gachiri at 16:16

Email ThisBlogThis!Share to TwitterShare to FacebookShare to Pinterest
Labels: Sub-Editing, The Standard