TWO COINS OF THE SAME SIDE

If one is to distinguish between journalism and blogging, will it be more clearer if one uses the point of view of a journalist, or the perspective of a blogger? Or is either option not equal to the task? This is one of those debates that can continue in perpetuity. It's like a two coins of the same side scenario. 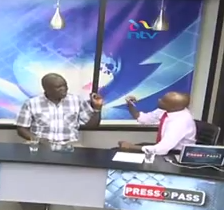 If you try and see it as two sides of the same coin, then you are likely to end up questioning the very existence of a coin that purports to have the capacity to have two sides.

And that was the folly of a gallant attempt of one of Kenya's mainstream media, when seeking to interrogate the role of bloggers and whether they needed to be regulated.

This was clearly from the point of view of standard journalism practise. In other words, trying to use apples to explain how bananas taste.

Below is a sample of online reactions.

Good info, many thank you to the author. It is incomprehensible to me now, but in general, the particular usefulness and importance is overpowering. Thanks again and good luck!