NEWS IS NOT AN EDITORIAL EXPERIMENT - THE BOGUS WATER & ELECTRICITY STORY

Aspiring scientists could be well-advised to avoid a section of the Kenyan media. Established scientists would be forgiven for concluding the TV is a certified idiot box. And unschooled journalists should be restrained from covering scientific topics. News is not an editorial experiment, so there's no room for a bogus story like the supposed water conducting electricity revelation.

The scripting of the highly suspect news report makes one continuously cringe at the very apparent display of ignorance.

There's ample empirical evidence to prove that I am not gifted in sciences, in an exam setting, (but my immense interest in any scientific inquiry is a deeply appreciated gift).

Yet I too, with my 'basic knowledge' was appalled by the massively flawed delivery of this particular TV news story.

The use of aggrandizing adjectives grossly distorted the purported factual elements.

And the capacity of the reporter to engage with the subject matter, to sufficiently make it meaningful to the audience, rapidly degenerates into an intellectual travesty.

The sole subject in the reportage is allowed to make concrete conclusions based on very flimsy grounds.

As is the default characteristic of many a Kenyan journalist, there is no evidence of proper interrogation of the assertions being made, during the filming of the piece.

Worse still, there's no indication there was any research done, post-production, to ascertain the core assumptions, before the story was aired.

Indeed, there's plenty of contrary information online, that would have raised serious doubts about the claims that 'all' water conducts electricity. 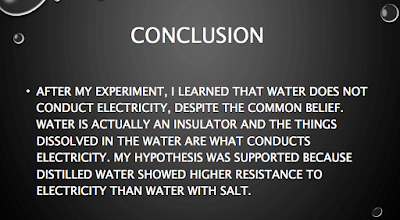 Perchance Kenyan newsrooms ought to have more journalists with distinct areas of specialization, as opposed to having calamitous all round reporters.