What makes sense to the media can be nonsense to the audience. And what amounts to nonsense in newsrooms can actually make a lot of sense to readers. But in a moment of extreme idiocy, that which is senseless, oozes lots of nonsense, for both the media outlet and its audience. It can happen, when a newspaper's editorial and production departments fall apart. 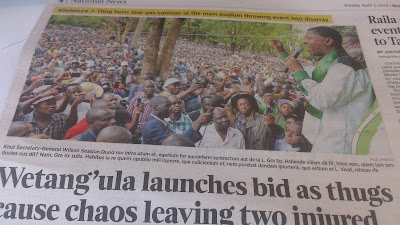 Indeed, there comes a time when minimum editorial judgement and maximum production senselessness are perfectly aligned, to publish, well...NONSENSE!

Grabbed from the flagship news product of the largest, (and 'misleading') media house in the region, the picture above, and its horrifying caption, astounded many a Kenyan reader.

It is not right on many wrong levels, rendered (using a presumably dead Latin language) in unintelligible morphemes like: "Quod mo intro utum at, egertum..." etcetera ad nauseam.

The central figure in the chaotic presidential campaign launch, is given the name of a vocal agitator of the rights of teachers, in a union with a prolific affinity to national strikes. 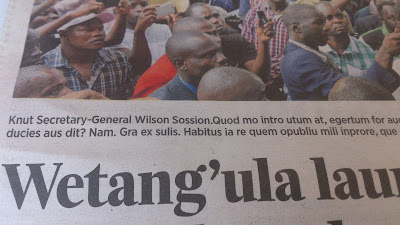 Here, at least the newspaper can be sued for wrongful representation of a highly recognisable political figure.

The custodian of teachers' welfare can likewise claim damages for being dragged into the murky world of politics.

Of greater concern to me is how the readers, (especially those who have invested their money in a news product, expecting to be better off, after consuming its content), should be compensated.

- Should they be allowed to return the 'faulty' newspaper to the news-stand, and ask for a refund?

- Should the paper's proprietors be compelled to provide a subsequent product for free, just like they do to advertisers, whose paid for commercial do not go out as scheduled?

- Should the newspaper's publishers be penalised for violating their contractual obligation to take every care not to put out an erroneous product in the market, so as to uphold the sanctity of the buyer-seller covenant?

Too many unanswered questions...hopefully making sense.

Somebody ought to take responsibility for publishing the senseless news nonsense.