There are days in the newsroom, when a scarcity of stories begets strange editorial decisions. Newspapers after all, still have to be produced daily, and the costs of production recouped, preferably at a profit. But the number of views of a video clip in social media, hardly constitute a front page story in mainstream media. A social media buzz does not automatically set mainstream media abuzz. 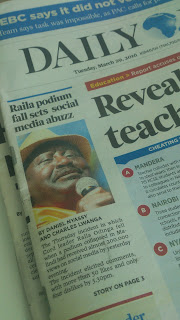 Okay. If we are talking about a billion views, a la Gangnam Style, it's justifiable to have such a story dominate the entertainment sections of any paper, globally.

Several million views? Perhaps still worth some prominent coverage locally, (inside pages of the entertainment section, don't you think?).

And we have a front page teaser, followed by a more substantial article that significantly amplifies the irrelevancies. 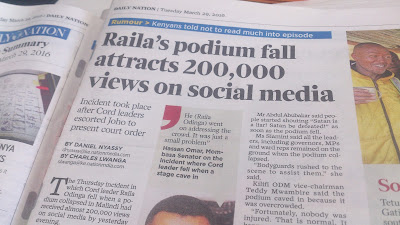 How can such a low number of views in social media be the news peg, in mainstream media?

If a prominent Kenyan politician takes a tumble, while addressing a public gathering, that agreeably, is newsworthy.

Very disagreeable, in my opinion, is to purport it's in the public's interest to know that:


"The incident elicited comments, with more than 50 likes and only 4  dislikes..."

Somebody enlighten me... we care about that because?

What's buzzing in social media circles, can be fuzzy in the mainstream media.