The focus on the evils of corruption has commendably been maintained by Kenyan media. It seems there's just no easy way of eradicating this friend of individual progress and fiend of national development. It does appear, however, like a section of the press is being selective on who to expose, with which dose of energy. Still, there's a thin line between public and private fat cats. 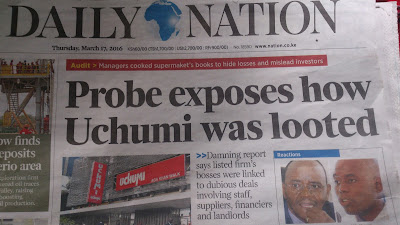 But in the country's leading daily, the one that grabbed the front page coverage was the one involving a publicly listed company.

Curiously perhaps, the second story was buried deep inside the business sections. 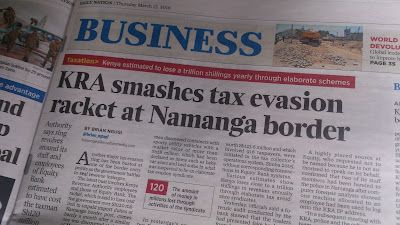 And yet it too, unearthed colossal amounts that were lost through an elaborate tax evasion scheme involving state revenue agents and employees of one of Kenya's biggest banks.

Was this a deliberate editorial decision, or were there external factors at play? (Notice the positive spin).

Would it have been too embarrassing to the government, if both scandals were given equal prominence? (the state apparently, could be a key stakeholder in newsroom decisions).

Or more outlandishly, could there have been a gentleman's agreement with the newspapers's main competitor, as to which paper should give what story maximum prominence? 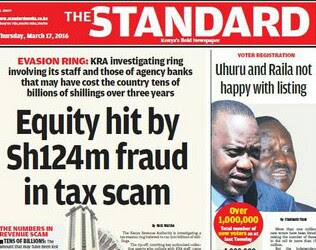 A product differentiation can after all translate to better sales for the two newspapers.

Carrying identical content could indeed make the overall purchases of the two dailies to diminish.

Why should a major newspaper splash a story, almost painstakingly buried in the inner sections of its rival paper?

Whatever the case, there's a thin line between public and private fat cats.

In the Kenyan context, we now ought to be describing these shameless looters as 'obese cats'.