One can easily think the local media has a split, nay, multiple personalities disorder. A particular issue can be positively thrust into the limelight, only for the same issue to be castigated in subsequent days. A big chunk of what is reported as news appears to be episodic. On the issue of VIPs protection, the media flips are not helping the audience to contextualize the factors at play. 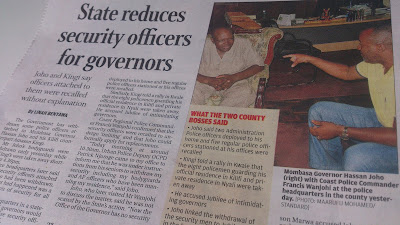 So, a governor insists his state-provided security has been withdrawn, while the central government alludes to the need to cut down on security officers seconded to high ranking public officials.

The media's attention is unfortunately scattered in different directions, and even political angles come into focus, with claims made of punitive action by the state to frustrate the governor.

There is even suggestions that the security agents of this particular governor could have engaged in dishonourable conduct, during a recent by-election.

Perhaps, this can pass, in the spirit of fortifying a news story with a multiplicity of angles, and voices from diverse sources, (then hopefully expect the public to make an informed conclusion, from the confusion). 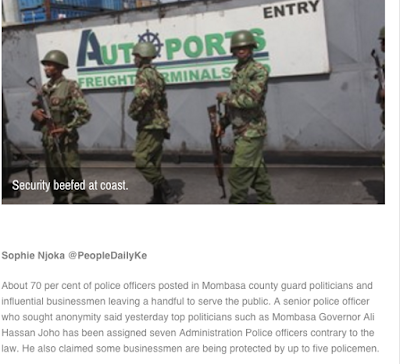 But what is telling and not being told, is that just a few days earlier, there had been genuine concerns raised about VIPs getting allocated many security officers, at the expense of the collective safety of the masses. 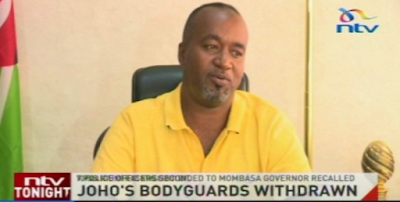 But when the government supposedly moves to rectify the situation, the media's 'sympathy' suddenly shifts to one individual, (who by any modest estimate, can afford superior private security).

I don't get it. Someone please explain, but not immediately. I'm still dizzy from the media flips and episodic news reportage.
Posted by Albert Gachiri at 15:12