DISTORTED RIGHT OF REPLY FOR MISREPRESENTATION OF FACTS

The right of reply accorded by the media, enables aggrieved parties to give their side of the story. If it's a written rejoinder, the newspaper can edit the article for clarity or space considerations. So, what happens if the aggrieved party buys space to give its version of facts? Can the contents of its rejoinder be edited? That appears to have been the case, in a queer case of a distorted right of reply, for perceived misrepresentation of facts.

In what looks like a paid up advertiser's announcement, there is no mention of the fact that the perceived offensive article was originally published by the same media house.

Indeed, it appears like this rejoinder had been heavily edited, before being published.

It did not make sense to me because I immediately sensed there was some missing information that was required, to make it more meaningful than:


"It is both incorrect for the Newspaper to come up with headlines as below."

Which newspaper? Why both? Could it have been an innocent editorial or graphical omission?

The same message made perfect sense, as published in a rival paper.

And on closer inspection, the reason why becomes very evident. The write up says:


"FACT: Its is both appalling and real distortion of facts for the Na... newspaper writer to come up with headlines as below."

Okay. The 'Its is' part needed to be edited.

But there seems to have been a deliberate effort to remove self-incriminating evidence against the newspaper that originally published the story.

Maybe from a legal point of view, that makes a lot of sense. 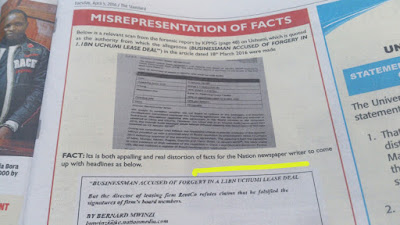 But what's the point of the media according the right of reply to an aggrieved party, seeking to set the record straight, if their intended message is going to be wantonly distorted?